So this past weekend I went to Paris, for my first time. I was so excited to go to Paris, it is a city that everyone says so many great things about, and one of those cities you feel like you have to see at least once in your life. I don’t really understand what makes a city a “must see” place, or one of those infamous places. What makes one city “better” than another, I don’t know I still haven’t figured it out. I get maybe with paris it’s all the history and movies and fashion. But does that mean traveling to a certain place becomes because of a social reason (since everyone knows it and talks about it) or because of a desire? ~ these are just free rambling thoughts of mine.. nothing against any of those “must see” cities, I want to go to all of them. I just wonder.. 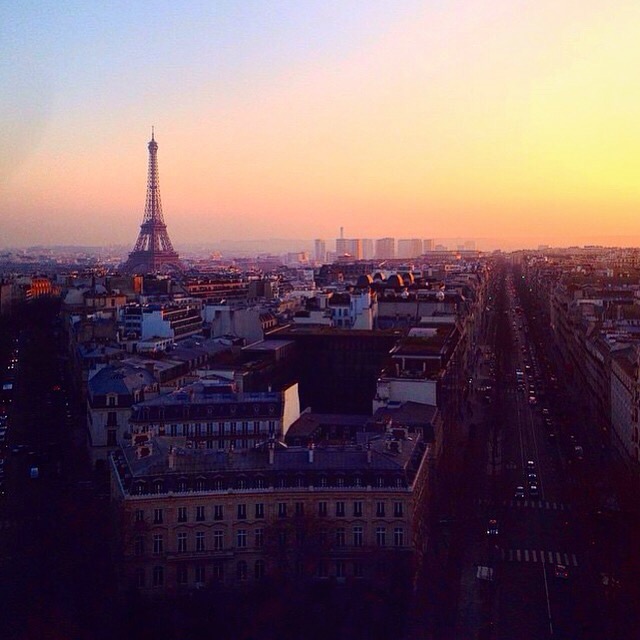 photo from the top of the arc de triumph, a beautiful view of paris

Anyway so the reason for going to Paris was not simply just to see Paris. My best friend from University was in Europe for a family vacation, and I couldn’t not see her while she was finally on the same continent as me again. I had not seen Rachel since July, 7 months, which when you have lived with someone for 4 straight years feels like an eternity. So I then decided I must go to Paris and visit her. But then i decided to make it a surprise. (because who doesn’t love to surprise their best friend) So I messaged some of her family members and booked my ticket to Paris So during my time in Paris I decided to stay in an Airbnb because I went with a friend so it was the same price (maybe even a little cheaper) for us to do an airbnb compared to a hostel. So we land in Paris and had directions to the airbnb, so we take the train to the metro, no problems at all. We get there (of course its raining ~ that should’ve been the hint for the tone of the rest of the trip) and were on this pedestrian street with stores in the middle that has tons of big apartment building on either side…without building numbers. Now were on the right street, and my googlemaps is telling me we are at the flat, but when i call up to the intercom number I was given.. it doesn’t exist in the building. Meanwhile it is now pouring rain and we have no idea where were supposed to be… also were supposed to meet Rachel’s family in an hour to pop out and surprise her. After calling the woman 3x (with no answer) we finally were able to make sense of the buildings and about 20 minutes after wandering in the pouring rain we were in the building. So after dropping off our things and quickly drying off we were off to the museum where we were going to surprise Rachel, I was so excited I couldn’t wait to finally see her and also to see her face at this surprise (hoping that we could actually pull it off) … but at the same time i was slightly cranky after a long morning of rain and no sleep, (I had to leave my apartment by 430 am in order to make my very early flight to paris, oh did I mention I had been up the whole night not feeling well… yeah off to a great start) Anyway ….so we finally are approaching the spot where were supposed to meet and I see a group of people I recognize, it’s Rachel and her whole family and I was so happy to see her I just took off running towards them. The second she saw me, she was just so confused.. she kept repeating “WHAT? Are you really here right now?” It was so great to finally be back together and in a city as exciting as Paris.

It’s weird how sometimes in certain friendships time can pass and it can seem like only days since the last time you saw eachother. As we were walking down the street chatting it felt like it was just the day before we were laying on our couch hungover talkig about the night before . I guess that’s a sign of real friendship.